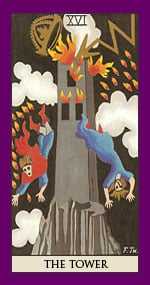 The Tower card first and foremost illustrates that neither physical nor emotional structures that we build are permanent and stable; instead, they can be destroyed suddenly, thereby initiating change that we have tried to avoid. The sudden change resembled by the crumbling tower reminds us of letting go of outgrown beliefs and values, of releasing an illusion, an unhealthy relationship, an old way of life. The sudden change frees us to face the unknown, frees us to move forward instead of stagnate, frees us from social conventions and enlightens us on our path so that we reach a new level of understanding about our purpose in life. Not embracing the inevitable change brings out the negative elements that the Tower also depicts: being struck down by one’s own doing, by vanity and the inability to change so that one remains stagnant.

Courtesy of Lady of the Abyss & Witches of the Craft