Tarot Card of the Day 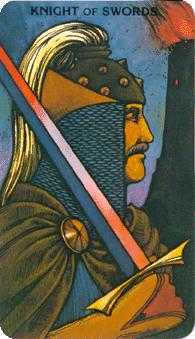 This card is traditionally entitled The Knight, but in some modern decks appears as The Prince. Traditionally, this card portrays the restless mind, aroused by thoughts of offense and defense, storming around searching for a target to pounce on. He often feels slighted, has a chip on his shoulder and bristles with a hostile attitude. His usual method is to look for someone to blame for his irritation.

Furthermore, in an attitude of righteousness, he may assign himself the job of correcting the offender. Jumping easily to conclusions, he shoots first, asks questions later and is therefore often guilty of overkill. This is not to say that he does not have his heroic side; a single-minded combativeness can have its value. However, even when he is doing the right thing, he is likely to be doing it for the wrong reasons. Apt advice for this card is to deeply question your motives for what you are thinking about doing. Forethought will assist you in discriminating between righteous and unrighteous causes. Control any traces of impulsive judgement!

Occasionally you will notice in the detail on the card, that the person can be a woman rather than the expected man. There is some evidence that the tradition of knighthood included a certain number of “anonymous knights” who took mythic names and veiled their true identities. Living on the road with few or no servants, they served as freelance defenders of travelers, champions of the little people against the exploitation of both highway robbers and the wealthy classes. Odds are that some of these knights-errant were camouflaged women, and that idea is preserved with the traditional representation of the Sword Knight.