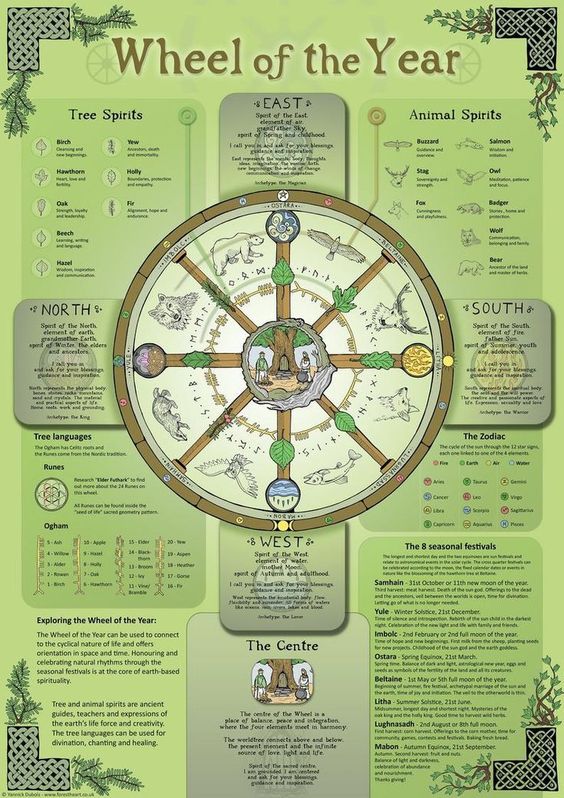 Samhain is the time of year when the veils are thinnest, and consequently the spirit world and our world are closer together and communication is more readily and frequently available to us. It’s also a time of year when some of us who are already psychically sensitive to spirits and daimons find that our senses are heightened.

So how we do best take advantage of this time of year? What types of magic are best to practice during this period?

First type that readily comes to mind: divination. Divination is one of those talents which lies both in the psychic and magical realms, and while there are certain forms of divination which fall under one versus the other, either way this is a great thing to practice right now. This especially goes for those who regularly work with a particular daimon or deity when they perform divinations. Deities and daimons associated with divinations, oracles, dreams, omens, and prophecy include Apollo, Zeus, Hekate, Hermes, Pan, Brigid, the Morrigan, Horus, Thoth, and Gabriel.

There is perhaps no other holiday so closely tied to wearing costumes as Samhain or Halloween. In Mickie Mueller’s Little Book of Halloween, she traces the tradition of costume wearing and trick-or-treating and how they were introduced by Pagans and kept alive despite the Christian Church’s transformation of Samhain into All Souls’ Day in an attempt to divert the people’s attention from pagan practices of honoring the deceased ancestors. She writes that:

We all have ancestors, both of blood and of spirit, and each of our lives rests firmly on the foundation of their sacrifice. They are as near to us as our breath and bones, and when related with in conscious ways, they can be a tremendous source of healing, guidance, and companionship. The ancestors we choose to honor may include not only recent and more distant family but also beloved friends and community, cultural and religious leaders, and even other-than-human kin such as companion animals. Our ancestors bring vital support to fulfill our potential here on Earth, and, through involvement in our lives, also further their own growth and maturation in the spirit realms.

Like the living, spirits of the deceased run the full spectrum from wise and loving to self-absorbed and harmful. Physical death is a major event for the soul, a rite of passage we will all face, and the living can provide critical momentum for the recently deceased to make the initiatory leap to become a helpful ancestor. Once the dead have become ancestors, part of their post-death journey may include making repairs for wrongs committed while here on Earth. For their sake and for ours, it’s good to spend a little time now and again feeding our relationships with the ancestors. The five suggestions below, none of which require belief in any specific tradition or dogma, are safe and effective ways to assist our beloved dead and to welcome the ongoing support and blessings of the ancestors in our everyday lives.

Fulfill Your Soul’s Purpose as an Ethical and Loving Person…

To read the rest of this article please click on this link: 5 Ways to Honor Your Ancestors

The Festival of the Dead or Feast of Ancestors is held in many cultures around the world. For centuries people globally have been honoring their ancestors. The reverent devotion expressed by their deceased forbears through a culturally prescribed set of rules and observances.  From Japan, China, Korea to Nepal, Peru, Mexico, India, Scotland, Ireland and Cambodia are to name just a few.

The ancient Greeks, Romans, Persians, the Pacific and Tongan Islands, Africa and Native America till this day continue to recognize the honoring. These religious traditions have remained steadfast and are usually practiced among cultures who have strong ancestral reverence.

I take this time of the year to remember all the people in my life gone. I build a little remembrance alter, give them an offering, light a candle and allow myself to slip between the veil.

A link with an insight on how people around the world celebrate their ancestors.

This article may seem out of place on this website but I thought it a good one to share as we approach Sanhaim. If it is offensive to any reader I appologize. I feel it is important to consider and know other cultures biews on how to honor those who cross the veil into the Summerlands.

Article written by Tara Bahrampour in the October 20, 2017 issue of the Washington Post

In some Indonesian villages, families live with and care for the bodies of their loved ones for months or years after they die. In Japan, relatives of the deceased use chopsticks to remove large bone fragments from cremated ashes. In Mexico, mummified babies and children were once revered, and people would hold parties and games for them.

If those practices sound alarming, Caitlin Doughty would like to remind you that injecting a body with formaldehyde might seem appalling to people in some parts of the world. Recently, she crisscrossed the globe looking at how diverse, and even healing, death can be. Her new book, “From Here To Eternity: Traveling the World to Find the Good Death,” published this month, underlines how subjective our views on death are.

Doughty, 33, is a mortician in Los Angeles but, as she says, “that doesn’t really describe it.” She is an activist for a view of death that offers a lot more choices than Americans have traditionally been given. Doughty believes that what happens after a person dies can be much more personal, transcendent, and comforting than the mainstream funeral industry would have us believe.

By exploring death rituals around the world, her goal was to open the door to new possibilities.

“Even things that we find strange or repulsive or disrespectful can actually be quite beautiful when you break them down and tell the stories,” she said. “I was hoping to prove that change is possible and that even when I’m standing there with a son brushing off his father’s mummified corpse or I’m seeing a body being pulled off a compost pile, there’s so much respect there and it’s such a human process. You could be surrounded by mummies and still feel completely comfortable … because there are children running around and playing and laughing and it just feels like a family has gotten together to be happy and perform this ritual.”

Doughty, who has written a memoir about her profession and also hosts “Ask A Mortician,” a series of video shorts that discuss such phenomena as coffin births (when built-up gases cause a recently deceased pregnant woman’s body to expel a fetus) and what happened to the bodies of those who died on the Titanic. Some of the videos boast hundreds of thousands of views, perhaps testimony to a transformation Doughty says is underway as more Americans consider alternatives to the standard funeral package.

“People are going to funeral homes and going to ‘traditional’ services and they’re more and more not satisfied with them,” she said. “They see Mom and she looks kind of waxen, and they’re like, ‘This isn’t for me. There must be another way.’ ”

This attitude reflects a generational change, she said. “The people who are really dying right now are in their 80s and 90s, the Greatest Generation. I think they’re going to be the last generation to embrace the embalming the body, putting it on display, the wake, the Catholic ritual. Baby boomers, Generation X and Millennials are more open to these new ideas, to these green ideas, to these participatory ideas.”

The new ideas include allowing loved ones to attend a cremation, or doing a water cremation, in which the body is dissolved in very hot water and lye (avoiding the use of natural gas and the release of toxins).

Doughty got interested in death as a child after witnessing another child suffer a fall that was likely fatal. The experience made her afraid of death; she confronted her fear by entering a field in which death is commonplace.

But once there, she felt something was missing.

“It was always my instinct that we weren’t doing enough for our families, that we weren’t giving them enough emotional space to really grieve and have feelings,” she said. “Nothing makes me more angry when I hear about someone asking a funeral director, ‘Do you think that I could come in and fix Mom’s hair and fix Mom’s lipstick, because she liked to wear it this way,’ and they say no. It’s like their self-esteem is so wrapped up in them being the professionals.”

By contrast, many other cultures encourage intimate physical contact with the deceased, resulting in a warmer, less forbidding experience. “When you’re in Mexico the whole cemetery is just glowing as they interact with the memories of the dead,” she said.

For the book she also traveled within the United States to visit people who are promoting alternative methods, such as a North Carolina group that experiments with composting human remains and a mobile funeral pyre operation in Colorado.

To Doughty there’s no right or wrong way to do things, including the standard American way, but she would like people to have access to a wider range of choices — such as burying a loved one’s remains on private property, or setting them on a mountaintop for the vultures.

“These things aren’t available and you should be angry about that, because the American funeral system has a lobby,” she said. “There are regulations in place that make it incredibly hard to enter the funeral industry or have any new type of disposition become available.”

Recently, the cremation rate surpassed the burial rate in the United States for the first time. Still, embalming, which is particularly lucrative for funeral homes, is more common here than in any other country, and it is often done even when a body is going to be cremated, Doughty said. Twenty-nine states require funeral homes to be ready to embalm, meaning that even if a mortician serves only clients who don’t embalm, such as Muslims, “the state is going to say, ‘You need to go to mortician school and set up a $100,000 embalming room.’ ”

For herself, Doughty wants to be buried close to the surface of the earth, “in that really rich topsoil full of microbes and fungi. I want my body to decompose. As women we’re taught to be contained and clean and not have control over our bodies. … There’s something about the messiness of the process — the oozing and stretching out into the dirt and the earth, and that my organic matter is merging with other organic matter, that is what’s really attractive to me and really brings me comfort.”

To all my sister’s in the North Happy Samhain.

On my blog today I posted about my friend Paloma and the article she wrote about the Day of the Dead.  Come check it out if you are interested!  You can read the article at the following link: